Last year, I worked with singer-songwriter and guitarist Adam Thorn to produce 3 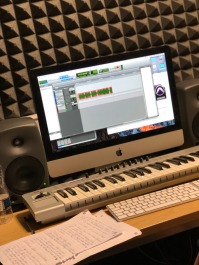 tracks. It was my first experience of recording an artist and then mastering the music solely by myself and I learnt a lot about the different elements to mastering including EQ, Automation and Reverb. I used a Neumann U87 Condenser Microphone to record the vocals and guitar tracks, and the software ProTools to master it.

Following the completion of the project, I wrote a reflective learning report to discuss how it went.

Before establishing what the contents of my production was going to be, I began the creative process by building my skills through a series of in class workshops and skills tutorials. This series included building knowledge and a practical understanding of signal flow, gain, microphone techniques, importing audio into pro tools, using the smart tool, EQ and compression and then mixing and mastering audio with a voiceover. During building such skills, I applied them by creating mini-productions on the software pro-tools to practice and demonstrate what I had learnt.

The first production was a series of vox-pops that answered the question “what is your favourite chocolate bar?” These vox-pops were recorded using a Zoom H4n recorder and each were conducted with a prior trial audio answering “what is your name and what did you have for breakfast?” This ensured that the gain was at a reasonable level (2/3 to 3/4), and by controlling the gain we were monitoring the level of signal going through the recorder, therefore ensuring the sound was loud enough. Following recording, I imported each voxpop into pro-tools, trimmed the clips to the relevant answer, and began to apply an EQ plugin, mainly reducing the mid-frequency filter to reduce the boom on the audio. I also used the software ‘audio hijack’ to download the song ‘Chocolate’ by The 1975 and café ambience from the internet, and imported these pieces of audio onto new tracks within protools. I was then able to mix the different tracks, first renaming them to tidy up the production and then applied automation during the voxpops to fade the volume down and then back up in a steps sequence at the end of the voxpops. To consolidate all the skills developed through making the first mini-production, I worked within a team to make a second production combining audio editing with visuals. For this, we downloaded a clip from Blue Planet and imported into protools, we then followed the previous process to add another soundtrack, however this time extended our learning by recording a voiceover using a Neumann U87 Condenser microphone in the voiceover booth as depicted in figure 3. We imported this voiceover into protools and then mixed the 3 tracks.

For my final production, I decided to use the same voiceover booth and the Neumann U87 Condenser microphone to produce 3 tracks for Popular Music Student Adam Thorn. I chose to record in this studio as the walls are lined with soft absorbers which are ‘porous materials applied to walls’ which effects ‘the loss of sound energy as air vibrates in the interstices of the foam’ (Nisbet, 2003, pg.44). This ensured a higher quality of recording was produced than if the recording took place in a normal room. I set up the booth by adjusting the microphone stand so the face of the microphone was positioned at shoulder height, angled down towards the guitar (as depicted in Figure1 in the bibliography). After reviewing my first recording, I also then placed the pop shield infront of the microphone in an effort to eliminate the ‘popping’ sound from the recording that can be caused from the fast movement of air when singing into the mic. After recording each guitar track I adjusted the microphone stand to be angled, in line with Adam’s face for the vocal recording. I recorded each song straight into protools by setting up two tracks; one for the guitar recording and one for the vocals. By doing the recording through this two-track process, it gave me more options post-recording as I would be able to manipulate and edit each track individually in pro-tools. For example, I could adjust the EQ shelves to reduce the low-frequencies on the guitar track when the bass was overpowering the vocal. To also aid Adam in the recording, I added a metronome to the recording using the click track on pro-tools. This was effective as it ensured that Adam didn’t speed up on either recording ensuring that when mixed the instrumental and vocal tracks were in sync.

After completing the recording of all 3 tracks in the voiceover booth, I began to edit them but discovered that the best way of completing this stage for me was to swap back and forth between the 3 tracks, applying roughly the same process to each of them. Firstly, I added the reverb input to the guitar tracks choosing the ‘small hall’ algorithm and setting the mix at approximately 30% on all three to make the effect subtler. I found this effect to give the guitar a nicer sound; making the sound less harsh and adding a short decay parameter to make notes ever so slightly echo. I then began to EQ all three productions and found that I needed to use the high pass filter on all three to remove some of the bass sounds of the guitar as Adam has a higher pitched voice causing it to originally sound quite odd in contrast with the rumble of the guitar. As one of the tracks was also a cover of ‘Part of Me’ by Neck Deep, I listened to an acoustic performance by the band of this track for reference (linked in the bibliography) and found that while the lead singer Ben Barlow has a deeper pitched voice than Adam, I had managed to replicate the sound of the lighter, less bass-y sound of the guitar to make it sound a closer match to the original. Finally, I used automation on all three tracks as learnt in the previously discussed productions and shown in figure 4, to decrease the volume of the guitar when it overpowered Adams vocal. It also enabled me to build the guitar track back up particularly towards the end of ‘Dakota’ – our Stereophonics cover, when Adam became more passionate and his vocal was more dynamic. There was however a technical issue in our part of me track where there was a large pop midway through which I have had to cut out using the trim tool but making the audio skip slightly. Therefore, to improve in future I should review my recordings more thoroughly in the voiceover booth so it can be rectified before reaching the audio-engineering stage. I also think that I am now more confident in all aspects and if I were to record more songs could add more tracks such as harmonies or a drum beat to improve the final production.