The conclusion of my research, is that men hold a more dominant position within the music industry compared to women. This statement is supported by both the primary and secondary data that I collected.

For my primary data, I chose to count the amount of male Billboard Magazine Covers versus female Billboard Magazine Covers in 2017 and 2018. I chose this source as Billboard is a magazine that is up to date with the latest music news and operates across genres. Because they are notorious for having the biggest music stars appear on their front covers each edition, it allows me to identify who the most significant figures are and their gender.

From the research, I found out that men dominated the covers in both years, in 2017 holding 65% of the covers and in 2018 the figure was 60%. This presents a 20-30% difference between the two genders, signifying a patriarchy within the main stars of the industry.

However, I wanted to delve deeper into the subject and identify if this was a pattern that was reflected across the industry, not just within the popular music artists, and the reasons behind the trend. To do this, I collected 4 different pieces of both quantitative and qualitative secondary data.

The first piece of secondary data is a report published by UCS Annenberg called ‘Inclusion in the Recording Studio’, set out with the aim to identify the realities of working in the recording industry. I have highlighted two sections from the report that I find particularly interesting.

Firstly, the report opens with statistics collected by the researchers from the Top 100 songs per year from 2012-2018. They found out that women accounted for only 17.1% of 2018’s Top 100, a rise on 16.8% in 2017. This is significant as it suggests an inequality in the top performers in the music charts, similar to the primary research collected. Some may argue that this could simply reflect musical talent/ability, but a simple primary glance across our own University music courses indicates to me as a researcher that this is unlikely to be the case.

The second statistic regarding the Grammy’s is also significant in highlighting the inequality previously regarded. Out of the 1064 Grammy Nominees from 2013-2019, only 10.4% were female, with 89.6% male. As both the Grammy nominations and results are decided by a board of expert Academy Members and eligible material submitted by record companies, the under-representation of women suggests a sexist bias as opposed to a lack of talent in both the record industry and award recognition.

Continuing the analysis, I collected statistics from the Billboard Top 100 Power List which spans across the whole industry, e.g. labels, touring, management and legal. This mirrors the previous results as in 2018 women only made up 17% of the list. This suggests that the inequality is a problem across the entire music industry as opposed to just talent basis.

Linking back to statistics behind the notion, WomenInMusic.org, a non-profit organisation provides interesting data. I chose to highlight 3 noteworthy statistics, the first being that 50% of freelance females are earning less than £10,000 per annum. This is an effect of the inequalities previously discussed as it indicates that there is an array of females in music, disposing the talent theory, they just aren’t finding the opportunities to earn or in well-paid positions.

Secondly, only 16% of PRS members in the UK are females suggesting a lack of female musicians who use music as a full-time profession. This suggests that the difficulty of being a female musician means they don’t see the values of PRS as they may not earn enough to justify the members fee. This is supported by the third statistic as across Europe women represent 20% or less of registered composers and songwriters. Thus, the conclusion of this data is that women most likely aren’t entering the music industry as a full-time profession, causing a disparity at the top of the industry reflected in earlier data and research.

Finally, to establish the reasoning behind these conclusions I studied an interview from Forbes Magazine with 4 female professionals from Third Side Music. For example, Melissa Woods talks about how there should be more opportunities for women, supporting the idea that there is a sexist bias toward men in employment and roles.

Another quote I found particularly helpful in exploring the reasoning behind the alarming statistics was from Natalie Cervelli who stated “Politics can also play a huge role, especially in the corporate side of things. I struggled with how to play that game and was often told to ‘pick my battles’ — a saying I absolutely hate.” I find this interesting as it suggests that even if you break through the recruitment barrier there is also internal misogyny within the industry, making the issue gender within music a long term thing.

Below are tables detailing the featured artists on all the Billboard covers throughout 2017/18. I have counted, the number of male covers vs female covers and totalled this at the bottom. For the purpose of the research, I have also discounted the covers which feature both genders or non-music artists. 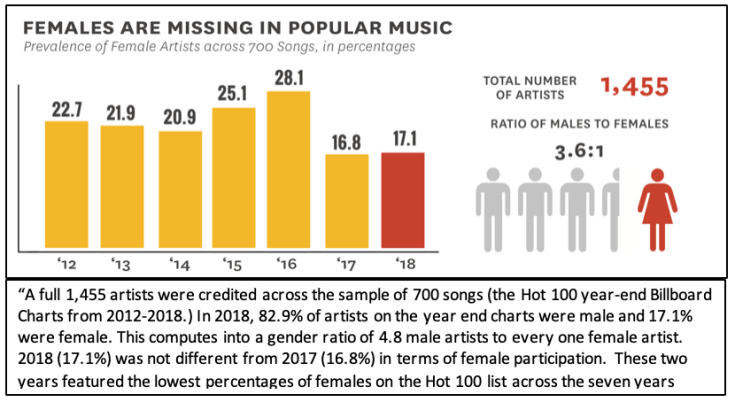 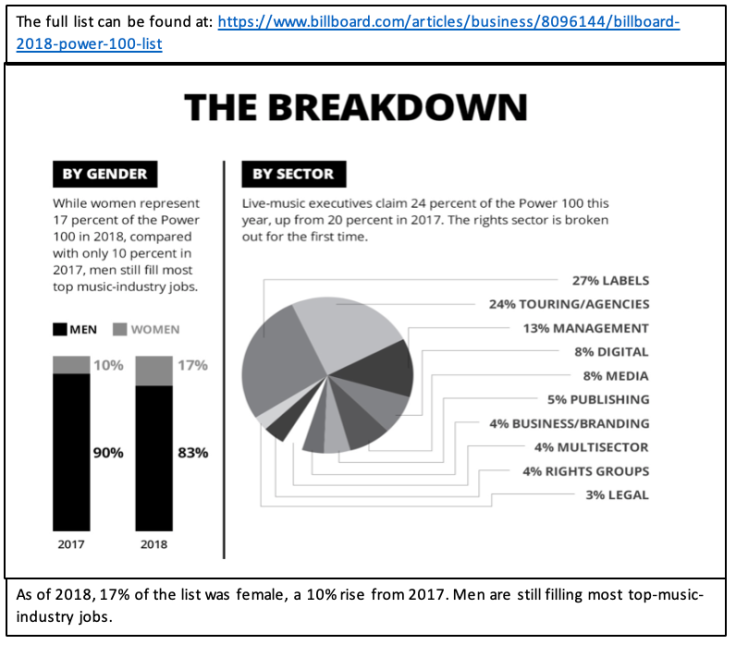 4) Forbes Interview with Third Side Music

In my research, I referred to an academic report published by UCS Annenberg called ‘Inclusion in the Recording Studio’ which highlighted that out of the top 100 songs in the 2018 Billboard charts, only 17.1% were female, a significant drop from the year 2016 which reached 28.1%.

In a press release, Dr. Smith who led the report stated:

‘The perception of women is highly stereotypical, sexualised and without skill. Until those core beliefs are altered, women will continue to face a roadblock as they navigate their careers.’

This alludes to one step that can be taken to promote gender equality, which is we must change our belief system to perceive women in an equal light to men.

My primary research compared the number of female Billboard magazine covers versus male covers, however upon further analysis the way females are perceived through the cover headlines also promotes the inequality shown within the data. For example, female headlines from the years 2017-2018 include ‘I Was Longing for Freedom’, ‘No Pain, No Reign’ and ‘Here’s to Never Giving Up’ all of which connote a weakness and a struggle amongst the female artists whom they are referring to. On the contrary, male headlines include, ‘Puth in Revolt’, ‘Country Power Player’ and ‘Weight of Their World’ signify strength amongst such male artists.

This example demonstrates first-hand the negative perception the media portray of women, as discussed by Dr. Smith. Thus, suggesting that there is direct correlation between Smith’s statement and the data in the report. By taking steps to highlight female artists as strong and successful within the media, portraying them in an equally positive light to men, it will consequently promote equality in the music industry.